They’re coming soon. School is about here and my summer adventure is drawing to a close. It was an action packed 3 months that included Germany, with a great show, and Galveston with my family. Time to get back to work at training young minds in the way of art. I love it still! The new semester will include art history, drawing and some painting. It must be one of the greatest jobs ever.

Today as I wait for the show opening, I walked around Hilmsen, Germany. Quick watercolors did the trick. It was really fun, and I met several people. The Hildebrandt family invited me in and fed me lunch after a tour of their gardens. It was wonderful. Mrs. Hildebrandt and her daughter Aila Nette were great hostesses. I could not believe how hospitable they were, and it reminded me of how nice the people of German have been to me.

At a wonderful Cathedral we set up the museum show today. it was in Salzwedel at Monchskiche. The exhibition is in a beautiful room with vaulted ceilings and floor crypts with ancient typography upon them. The opening is tomorrow with a concert by Shelia Swift, (No relation to Taylor) this museum was formerly a church built in 1280, or rather was first mentioned in a document at that time as a monastery. It was converted to a Protestant interior in 1581 and graced with an altarpiece by Lucas Cranach the younger of a Latin teaching of Martin Luther referencing workers in the Lords Vinyard. Several discoveries were made in the late 1800s of painted masks, and murals including one of St. Gregory and Mary.

This was from a day behind the Iron Curtain in East Germany. The beautiful town of Salzwedel. It had all the charm I hope for in a small, German town. The cobblestone narrow streets, and timbered walls of the shops, some of which dated back to the sixteenth century. The old Monks church was in existence in the thirteenth century, and I will have a show there on Thursday. I sat in the city square and drew this with the clock tower in front of me. It was like I was in a dream.

Today’s post is a scene of Joshua Hubbard from the book I’m working on, climbing down toward shoreline. While doing this he discovers two boats, and three people working on something.

I am again working on my children’s book called Huber in Vastergotland. Here is the world map showing the land masses, the people groups and the world wall. 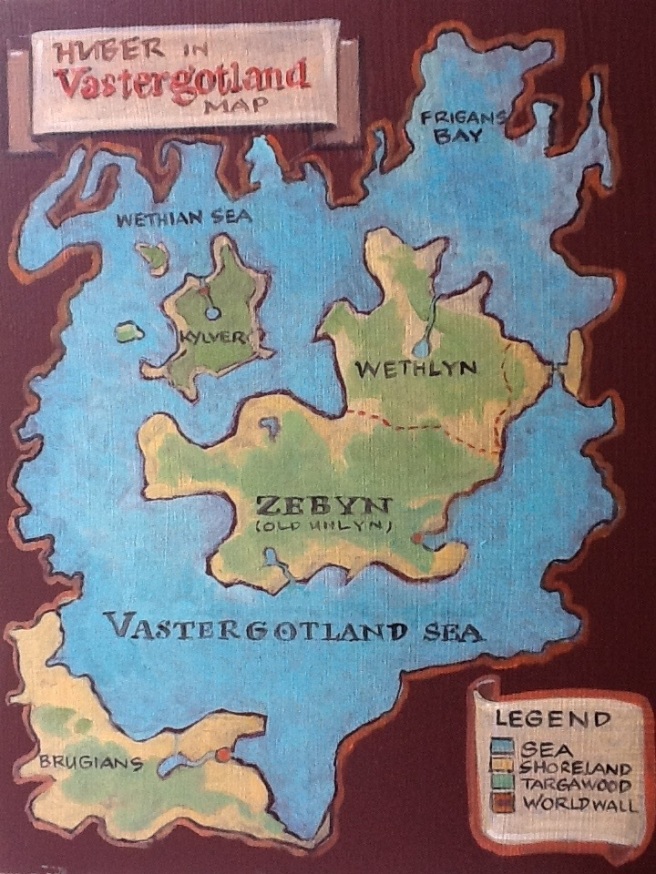 Today I created this scene for my children’s book, Huber in Vastergotland. As Joshua Hubbard emerges from the tunnel underground, he sees the Wethian Sea far below. He has entered a new world miles below Iceland, called Vastergotland.